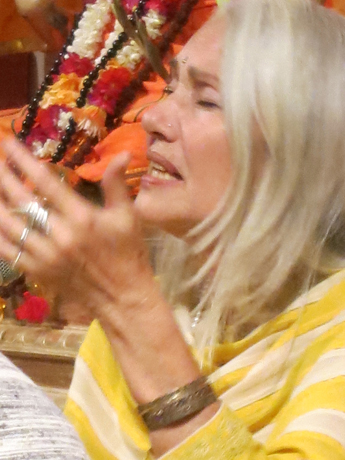 Shanti Shivani is one of the few Western pioneers bringing the sacred traditions of Nada Yoga and Dhrupad, the most ancient style of Hindustani classical music, to the West. She brings a wealth of vocal, meditative, movement and experience to her classes and performances. She had the great fortune to be accepted as a parampara student of the premier family of the Dhrupad lineage, the Dagar family. Her first teacher was Dr. Ritwik Sanyal before continuing her studies with his gurus, the late rudra veena maestro Ustad Zia Mohiuddin Dagar and his brother Ustad Zia Fariduddin Dagar. Their family has been passing on the Dhrupad tradition for nineteen generations. Her studies with Ustad Rahim Fahimuddin Dagar enriched her understanding of Nada Yoga.

She spent 8 years in India studying and practicing Shaivism and Tibetan Buddhism along with her Dhrupad studies. On her quest for healing and self-realization through sound, she also studied with renowned Western musicians and sound healers such as Fabien Maman of the Academy of Sound, Color and Movement.

Frédérick Leboyer, with whom she collaborated for 8 years, was a key mentor for her, as he helped her understand the profound connection between voice, breath and movement.

Dhrupad occupies a very special place in her creative life, as it induces a deep contemplative state, thus connecting the performer as well as the listener with Divine Source. It is the basis of her teachings of Nada Yoga – the Yoga of Sound.

She has been teaching internationally at conferences, in retreat centers, Ayurvedic centers, liberal arts colleges, schools, hospitals and birthing homes and privately since 1986.

Shanti has been performing in concert and at festivals such as the World Sacred Music Festival in Los Angeles since 1989. She has several albums to her credit and has been recording as a solo artist and in collaboration with many World Music artists since 1997. Shanti is currently living in Eugene, Oregon.