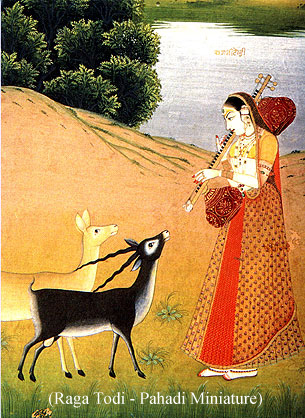 Dhrupad is the most ancient form of Hindustani classical music. There are two interpretations for the word Dhrupad. One is that it is derived from dhruva, the steadfast evening star, and pada, meaning ‘poem’. The other is that the word druva means ‘fixed’ and pada ‘poem’ which makes it into a poem set to music. Its origins have been traced back to the recitation of the sama veda, one of the four sacred vedic scriptures. The form developed through the sama gaan, the chanted transmission of holy texts. Sometime during the first millenium A.D. the chanting evolved into the singing of chhanda and prabandha. The modern Dhrupad is said to have emerged out of the prabandha style of the 12th to 14th centuries. By the 11th century it had developed its perfect form. Dhrupad was and still is an act of worship during which the priest or musician surrenders to the Divine and invokes the rasa (mood) of the raga (musical mode). The intention is to put the listener into a state of inner peace and contemplation. Between the 12th and 16th centuries the language of the compositions changed from Sanskrit to Brijbhasha (the language spoken in the area of Brindavan) and about six centuries ago the music came under the patronage of the royal Moghul courts, where it was adapted for performance, thus evolving into a refined and sophisticated art form. The compositions became more secular though and were often praises of the emperors, whereas before they had been devotional and philosophical in nature. One of the patrons of Dhrupad was the Moghul ruler Man Singh Tomar of Gwalior who also practiced the art. It reached its peak during the time of the legendary court musician of Akbar, Tansen, and Swami Haridas, who is often thought to have been the teacher of Tansen. The most important schools of Dhrupad are the Dagar and Vishnupur.

Like all forms of Indian classical music, Dhrupad is based on the ancient raga system, a highly scientific system of musical modes that corrolates the modes with the different times of the day and the seasons of the year, thus putting the singer and listener in tune with time and space. A raga is a musical entity based on a musical mode, an ascending and descending scale and specific principal notes (vadi, samvadi, nyasa) that create the mood. Although the musician has an outline on which to improvise, his/her creative talent and his/her expression of feeling determines the depth of the musical experience for the listener. The way the principal notes are approached and embellished also has a profound effect on the mood wanting to be invoked, as every note corresponds to a certain emotion. Dhrupad puts great emphasis on the purity of raga and swara (intonation). It is typically performed in two parts: the alap (the slow, gradual development of the raga without percussion accompaniment that can encompass 2 1/2 octaves) and the bandish or composition, a poem accompanied by the pakhawaj, a horizontal double-headed drum, set to a rhythmic meter (tala). The Dhrupad talas are made up of 7, 10, 12 and 14 beats. Dhrupad emphasizes a slow, meditative rendition of the alap using sacred Sanskrit syllables derived from Sanskrit mantras. The alap gradually speeds up with the introduction of a rhythmic pulse that builds to a point where the melodic patterns seem to sweep away the singer. The raga culminates in the intricate musical dialogue of the singer and drummer playing against or complementing each other during the bandish which is usually devotional or philosophical in nature, but may also specify the use of raga, tala, swara (musical note) and laya (tempo or timing). During the bandish the singer improvises on the melody and rhythm.

Despite its evolution, Dhrupad has preserved its pristine, spiritual nature and we hear this majestic music performed today as it was more than five hundred years ago.

Some of the greatest exponents of this grand style are:

Read about the Dhrupad Lineage and the Dagar Family