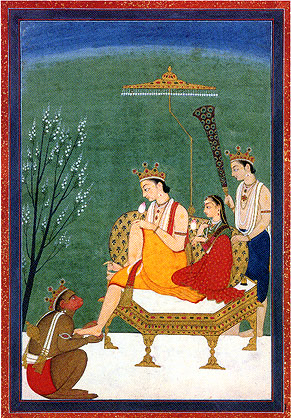 (The great Bhakta Hanuman with Ram, Sita and Lakshman >> )

"Shanti Shivani's exquisite voice transmits a purity, clarity and depth of feeling that is rare. When she sings, it is as though the great Goddess herself is speaking directly to you, filling you with her warmth, light and divine grace." - Sharron Rose, dancer/choreographer, author of "The Path of the Priestess"

Kirtan is the name for Hindu devotional chanting which means remembering the name of God. By chanting the name of God with true devotion we are able to access the Divine within, thus attaining a state of bliss. Devotional chanting is found in all traditions. Though the forms vary, the goal is the same: Union with the Divine. Devotion is the foundation of all forms of sacred music. The form may be very complex and refined as in classical Indian music or Gregorian chant or as simple as chanting the name of God in a call-and- response style as in Hindu kirtan, but what really counts is the degree of devotion, surrender. Most Hindu and Buddhist chants are in the sacred language Sanskrit. The mere utterance of Sanskrit syllables, words or sutras puts the speaker or singer in an altered state of mind. This is why the recitation of mantras (prayers in Sanskrit) and the sacred texts is so powerful. We merge with the nada or nadam, the inner sound current and become one with All.

Shanti Shivani's kirtan events are quite unique, because she not not only leads call-and-response chanting, but also sings an Indian classical raga (musical mode) in Dhrupad style to set up a sacred space which allows the listener to let go of the chattering mind and transports them beyond their everyday reality to experience Oneness with the Divine..

Shanti Shivani has two tamburas, the celestial sounding drone instruments of Indian classical music, accompaning her as well as tablas (North Indian drums) or a pakhawaj ( horizontal double-headed drum) and depending on where she is performing, a guitar, violin, cello or hammered dulcimer played by local musician friends. Usually one or two back-up vocalists and cymbal players join in as well. The more musicians, the more ecstasy!

Depending on the gathering, we will sing solely Hindu chants or interdenominational chants.