My personal ‘journey into sound’ started at the age of 7, with my flute teacher in Bavaria, Germany, Frau Schumann (the name itself was auspicious). Frau Schumann was a very spiritual, elderly woman, who not only introduced me to the music of Mozart, Chopin and Bach, but also to vegetarian food. We would spend half of our afternoons talking about God and many years later during my 8 year pilgrimage in India, I realized that she had planted the seed for sacred music and the spiritual quest in me at that tender age. When I was 10, my family moved to the USA and my interest shifted from classical music to learning the latest dance crazes and listening to the Beatles etc.. 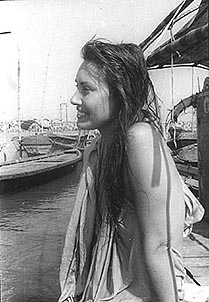 Shanti at the Kumbha Mela in Allahabad, 1982